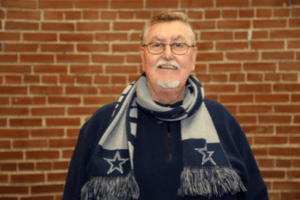 Napper assumed his PSR role in May 2011—two years after Abstrakt’s founding—and later was promoted to PSR Level 10. During his tenure, he played a critical role in creating sales opportunities by scheduling appointments on behalf of his clients. Napper’s other responsibilities included managing a pipeline process of targeted contacts, creating a client database, inputting scripts, emails, and more.

“I have had the pleasure of working with Larry over the past two and a half years. I have never seen someone own their book of business and truly care so much about their clients as much as he did,” said Aaron Brauer, Partner Sales Manager. “His work ethic is untouchable, and while he is retiring, the impact he’s had on Abstrakt will be everlasting.”

Napper’s achievements at Abstrakt will not be forgotten. During his time at the agency, he achieved many milestones and received several awards, including:

“My greatest work memory was when Larry won salesperson of the year at Full Circle and everyone was perplexed. They all wondered what Larry’s secret recipe was,” said Brian Condon, Abstrakt Partner and Executive Vice President. “Larry’s message was, ‘I outworked you all.’ He was right and, obviously, that work ethic, activity level, and tenacity carried over here at AMG. Thank you, Larry!”

In honor of Napper’s retirement, Abstrakt is dedicating its new auditorium to him. From now on, the space will be known as The Napper Auditorium.

Based in St. Louis, Abstrakt Marketing Group is a business-growth agency serving over 700 clients nationwide. With 325+ employees, Abstrakt has grown rapidly since its founding in 2009. Abstrakt is a full-service lead generation company, offering inbound and outbound solutions for client partners. For more information, visit abstraktmg.com.

How Salesforce Can Increase Your Profit